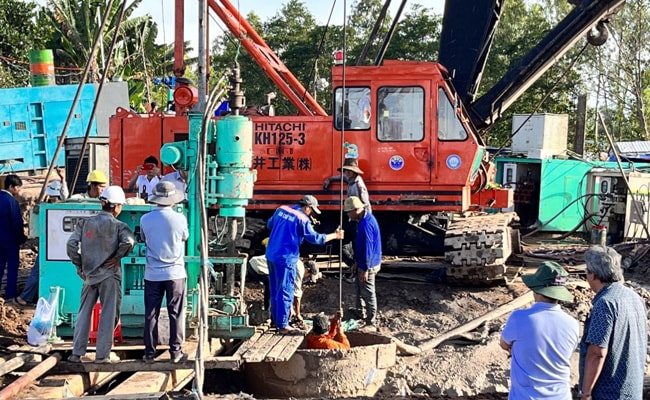 The boy fell into the 25-centimetre-wide shaft of the pillar.

A ten-year-old Vietnamese boy trapped in a buried hole concrete pillar at a building web site for 4 days was declared useless on Wednesday.

Rescuers in Dong Thap province within the Mekong Delta had been attempting to boost the pillar from its 35-metre-deep (115-feet) gap and lower out younger Thai Ly Hao Nam.

The boy fell into the 25-centimetre-wide (12-inch) shaft of the pillar — sunk as a part of a brand new bridge — on Saturday, apparently whereas in search of scrap steel.

Doan Tan Buu, deputy chief of the province, mentioned on Wednesday that the boy had died.

“He has been trapped in a hole pillar very deep down… with a number of accidents and never sufficient oxygen for a really very long time,” he advised journalists on the building web site.

“We had prioritised the rescue of the boy. Nonetheless, the situations imply it’s unimaginable the boy has survived,” he added.

Buu mentioned the announcement of the boy’s demise was made after consulting with medical specialists.

Rescuers are decided to deliver his physique up as quickly as doable for burial, however Buu admitted it was a “very tough process”.

Vietnam on Tuesday mobilised lots of of troopers and engineering specialists to attempt to rescue Nam.

A 19-metre steel pipe was lowered across the concrete tube wherein the boy was trapped to permit them to take away mud and attempt to elevate it out.

Rescuers had softened and tried to take away mud and water to scale back stress across the pillar, however days of effort had did not repay.